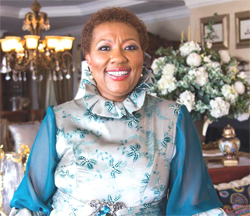 BY BUHLE NDWENI Internationally acclaimed entrepreneur Anna Mokgokong was recently honoured with a Lifetime Achievement Award at the South African Premier Business Awards. A medical doctor by training, she has come a long way from her days as a medical officer at Ga-Rankuwa Hospital (now known as Dr George Mukhari Hospital) in the north of Pretoria.

Besides holding a number of directorships in listed companies, including AfroCentric Investment Corporation, which focuses mainly on the healthcare sector, pharmaceutical group Adcock Ingram and retail giant  Shoprite, Mokgokong also sits on the boards of a number of private  companies.

One of these is empowerment company Community Investment Holdings (CIH), which she co-founded with Joe Madungandaba in 1995. She says that while she is a BEE player, she never had a sense of entitlement that as a black woman she should have empowerment transactions handed to her on a silver platter. Instead, she has had to hunt for such opportunities and worked hard to get them.

"CIH is now in six different sectors: healthcare, logistics, energy, infrastructure development, mining and ICT. Founded 20 years ago [as Community Hospital Management] and rebranded CIH in 2000, it has been a typical black economic empowerment investment holding company that's gone through the motions of BEE. But now we are at a stage of consolidation and narrowing our interest into fewer, but stronger and more robust investments," says Mokgokong. This includes Tamasa Investment Holdings, a new venture with a focus on the energy sector.

There is always a criticism that people with multiple directorships are over-committed, Mokgokong says. "But who is actually measuring that and measuring what you do? It's a perception. People must be allowed to take on the kind of responsibility they believe they can handle. What I like is within the board we've got a peer review system that reviews your effectiveness as a board member; no longer do you sit there to have coffee and then go away. A lot more is expected of board members."

She turns down a lot of requests for appointments on boards; the directorships she takes on must be of strategic value to her personal and business interests, Mokgokong says.

"Why am I on the board of Shoprite, which is the largest retailer in Africa? It's because I've gone there to learn how you actually run a business of that size and nature; what it takes to be so successful."

This is important because she never got a formal business education, explains Mokgokong. "My training has been at the university of experience and of life. And I must say I have learnt a lot from the Shoprite board and I take that knowledge and information to the other boards that I either chair or I'm part of." Last year, businessman Brian Joffe, who also serves as chairman of Adcock Ingram following Bidvest's substantial investment in the group, appointed Mokgokong as a non-executive director. Although she had not planned such a move, she welcomed her appointment to this role.

"Adcock Ingram was an additional responsibility, but since I'm in the healthcare space and I have been there since the 80s, for me it was a walk in the park to move into Adcock. I'm used to that, to me it's not new," she says. "I still apply the information and the knowledge I gathered as a medical doctor in business today. When I sit on the board of Adcock, I know how a doctor who prescribes those medicines thinks."

The liquidation in October 1999 of JSE-listed medical supplies company MacMed Healthcare, where she was executive director, is her greatest business challenge to date. "It was beyond me, I was new in the corporate world... and one didn't know what the responsibilities of a director were. And it cost us a lot, in terms of our reputation as well as financially. We lost a lot of money.

"You arrive at a place where they look at you and call you scum of note and you move on. And you move on to those who say: 'You know what Anna, we understand that this was not your fault.' So there were people who were supportive of us," Mokgokong remembers.

Her resilient and tenacious nature saw her through. "You have to tell yourself, I have to start from scratch. I'm down in the dumps, this is how people perceive me, but I'm going to prove them wrong because I did nothing wrong."

More successful has been her involvement with AfroCentric, where she has served as chairman since 2010 following AfroCentric's acquisition of Lethimvula Investments, which owned Medscheme Holdings. The acquisition resulted in the formation of a health-focused division known as AfroCentric Health. Other businesses under Afrocentric Health include Helios, Allegra and Aid for Aids. AfroCentric Investments also holds a stake in Jasco Group and is in a joint venture with Rio Tinto on a prospecting project.

AfroCentric has seen its fortunes improve, with the group reporting a 29.4% increase in headline earnings and a maiden interim dividend in the six-month period to end December. "To get this kind of consistent good results takes a lot of hard work and a dedicated team as well," says Mokgokong. "I pay tribute to the team, but also for me at the helm of the leadership it also takes a lot because I'm not a passive chairperson who only attends board meetings."

AfroCentric announced two major transactions in September last year: the acquisition of wholesale and courier pharmacy businesses belonging to WAD Holdings, for R400.7m, and a purchase by Sanlam of a 28.7% stake in AfroCentric's healthcare business.

This Sanlam deal will give the financial services group an effective 27% stake in Medscheme, the country's third-largest medical scheme administrator whose clients include Bonitas, Fedhealth and the Government Employees Medical Scheme.

"Sanlam is investing in us and that will also add to the basket of products that we can sell. So it's a very strong evolutionary step that we're taking because any business doesn't just depend on traditional old business."

Looking at the local healthcare business space, Mokgokong says that there is room to grow, provided businesses are innovative in their offerings. "This space is for the innovative people; if you're going to think it's business as usual, you're gone. You have to think of South Africa today, where it is and where can we take it as the private sector, because the private sector will always be required to underpin it as well." She hopes government's plans for a National Health Insurance (NHI) will create more opportunities so that private businesses in healthcare can also support the department of health's mandate in public health. editorial@finweek.co.za

WHAT TIME DO YOU START YOUR DAY?

Normally at 8am. Although she works from her home office in Pretoria, she mostly steps out and meets people because that's an integral part of her job. "If I'm in the office all week, it means I haven't done any work. My job is to direct strategy and I do that by engaging with people and hearing what's available in the market."

Mokgokong is not a micromanager and if she finds she has to, then it means she doesn't have the right team surrounding her. "People must hear the first time what you are saying; we must engage about it, ask questions if they don't understand. But there are people to whom you give a mandate and when you come back they are still where they were. Had they said something, I would have unlocked the problem."

"They are go-getters. They are fearless like me. They break any boundary."

She's not really a technology person, but always carries her iPhone and occasionally her iPad with her.

Between reading board reports and documents, she has little time to read for pleasure. But she likes books by author Alexander McCall Smith (probably best known for The No. 7 Ladies' Detective Agency), because they make her laugh. She loves reading magazines that focus on the lighter side of life to switch off from her often serious business life.

HOW DO YOU RELAX?

"I just like to sit at home with family. I travel all the time, so for me a holiday is not travelling on a plane. And I like to do anything spontaneous, something that is hassle-free."